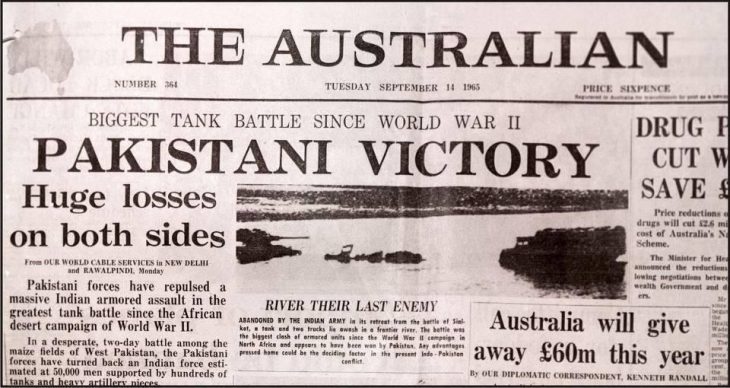 On September 7, Air Force Day (Yum-e-Fizaiya) is being celebrated by every Pakistani in the memory of the martyrs and heroes of the 1965 war, and to pay tribute to Pakistan Air Force (PAF) which won aerial warfare by defeating India.

On September 6, 1965 when India suddenly attacked Pakistan, its forces crossed the international border and the BRB canal, and captured a town of Batapore, Lahore, (Lahore-Burki sector) the same day; a counter offensive of an armoured division and infantry division supported by Pakistan Air Force forced the Indian 15th Division to withdraw to its starting point.

Despite Indian surprise invasion in 1965, while displaying valour, and without bothering for their lives, the pilots of the PAF castigated the Indian Air Force (IAF) in the aerial warfare. In this regard, Squadron Leader M. M. Alam set new records in history of air warfare on 7th September by defending Pakistan’s airspace against the aggressors, and shot down five Indian aircraft in less than sixty seconds at Sargodha. He is rightly branded as a “hunter of the hunters”. And Flight Lieutenant Yunus Hussain fought in air battles aggressively and fearlessly. During one such engagement, he fought singly against 6 enemy aircraft and shot down 2 Hunters. Though his own aircraft was damaged in this encounter, he managed to bring it back to base safely.

On 6 September, while attacking Halwara airfield, his small formation was intercepted by a large number of enemy and, although his aircraft was hit, he refused to break off the engagement, in complete disregard of personal safety, and was reported missing from this mission. While Squadron Leader Sarfaraz Ahmad Rafiqui led a formation of 3 F-86 aircraft on a strike against Halwara airfield, the formation was intercepted by about 10 Hunter aircraft out of which Squadron Leader Rafiqui accounted for one. But, then his guns jammed due to a defect.

However, Rafiqui refused to leave the battle area instead he ordered his No. 2 to continue the engagement, while his end was never in doubt, but, he chose to disregard it and, his aircraft was shot down and he was martyred.

As regards the victory of PAF, a writer of the Pakistan Air Force elaborates, “To achieve this, PAF adopted an aggressive and courageous approach, which ultimately provided an impregnable shield to the country’s airspace. This was also attributable to the leadership of Chief of the Air Staff Air Marshal Asghar Khan and dynamic leadership of Air Marshal Nur Khan—said on 4th September that superiority in numbers does not decide air battles; better training, morale, and above all fighting spirit in fact are the deciding factors—what many don’t know is that it was the PAF who played a major role in denying General Chaudhry of Indian Army his cocktail party at Gymkhana Lahore.

PAF air support at this crucial juncture turned the tables on the enemy—at this crucial juncture, appeared 06 PAF Sabres led by SQN LDR Sajjad “Nosey” Haider and wrought havoc with the enemy armor and infantry trying to cross the BRB Canal—air support continued as 18 more F-86 Sabres kept pounding guns, tanks which were trying to advance towards Lahore, Jassar and Kasur. PAF was instrumental in saving Lahore.”

Nevertheless, Pakistan Air Force made it possible for the ground troops to recapture the territories from India, and also to take from Indian forces various regions like Khem Karan Rajastan, Chumb etc.

It is notable that the marvelous performance of PAF was substantiated by a letter sent by President of Pakistan to Air Marshal Nur Khan, complimenting the PAF on its first two days of full-scale operations. Subsequently, PAF remained in virtual control in vital battle areas as the IAF, after 7th September, showed growing reluctance to engage an aerial combat. This record-breaking role of PAF is primarily attributable to salient aspects of leadership and brevity. The employment of the bomber fleet was also very well-planned by the PAF top leadership. Besides the fighters, the bombers also made significant contributions by undertaking regular night bombing operations against a number of Indian airfields, damaging most of them.

The brilliantly-flown PAF Sabers inflicted more losses on the IAF Hunters, Gnats and Mysteres. PAF also exhibited a classic example of unconventional mans utilizing its C-130 fleet for night bombing. The speed with which the idea was adopted and the necessary modifications incorporated reflected the PAF’s pilots and engineer’s genius for improvisation.

The 1965 war saw the best of the PAF’s war-fighting abilities, and made history by shooting down 13 aircraft in one day. PAF emerged as glorious because of a very high standard of its leadership and a determination, springing from the realization that national survival was at stake. During 1965 war, PAF had destroyed 104 Indian aircraft on ground and in the air, while damaged more than 10—not counting the losses, inflicted by PAF’s night bombing on the India airfields and bases and other military installations.

It is mentionable that some opine that India and Pakistan have made contradictory claims of victory during the aerial warfare of the 1965 war. But facts cannot be denied, which prove that PAF won this war. In this respect, while realizing Indian failures, Indian Air Chief Marshal (R) P.C. Lal who was the Vice Chief of Air Staff during the Indo-Pak 1965 war, points to the lack of coordination between the IAF and the Indian army. While, in his book, titled “The Duels of the Himalayan Eagle: The First Indo-Pak Air War”, which is being released on September 1, this year, ex-Indian Air Marshal Bharat Kumar admitted the Indian defeat in the war of 1965, as disclosed by The Times of India. He reveals, “It was the first air battle between India and Pakistan.

The Indian Air Force was numerically superior, with 28 combat squadrons to PAF’s 11, but it was saddled with technologically inferior fighters. IAF’s latest history of its operations in the 1965 war acknowledges it suffered disproportionately higher losses than PAF. But, it says the force showed resilience and determination to set aside initial losses and gradually turn the tables on its adversary with effective counter-strikes to prosecute the war till the ceasefire came into effect on September 22”. The book indicates, “There is no doubt that Indian losses in aircraft were higher” than those of Pakistan—tried to use just this figure alone to proclaim its victory”.

Undoubtedly, in aerial warfare between IAFF and PAF, the latter emerged as victorious in the I965 war. Pakistan Air Force gained a lot of credibility among Pakistan military and international war writers for successful defence of Lahore and other important areas of Pakistan and heavy retaliation to India. Thought-out the war, PAF not only maintained its air superiority, but also remained vigilant in informing armed forces and general masses regarding the air attacks of Indian fighters.

Sajjad Shaukat writes on international affairs and is author of the book: US vs Islamic Militants, Invisible Balance of Power: Dangerous Shift in International Relations