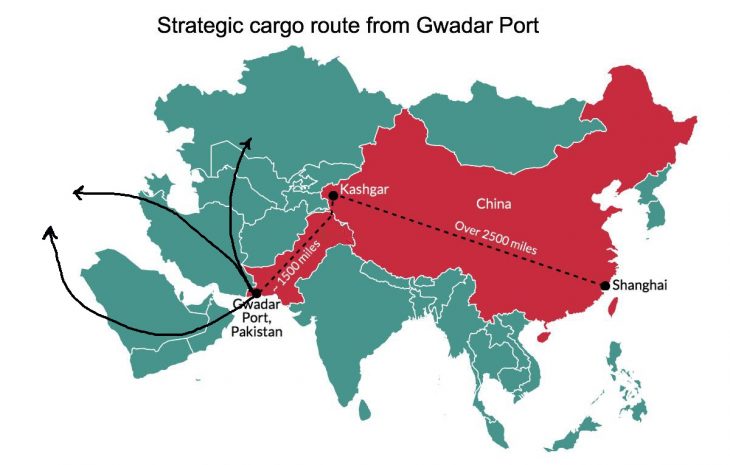 Since the time, China Pakistan Economic Corridor has made it to its existence, speculations on the vision has seen some great projects and sites developed under its banner, the Gwadar port is one of these elements.

History says that Gwadar was given as a gift to Oman by the prince of Kalat in 1783 After the independence in 1947, after the constant urge of Government of Pakistan, Oman sold Pakistan, Gwadar for $3 million in 1958. Since that time, It has been taken as an integral part of the Balochistan and a prominent region from political and social perceptions.

The remarkable and historic initiative of CPEC is considered a landmark In the history of Pak-China relationship. The two countries and their cordial friendship was accepted by everyone around the world when this expression of bonding has started taken a shape. CPEC has got mutual attention of both Pakistan and China and both the countries have been assiduously wooing Russia, Iran and Afghanistan to join the CPEC project for mutual benefits.

• Gwadar Port and its Construction:

Gwadar Port, a $62 billion project under the banner of CPEC is under construction. It is supposed to link Xinjian province of China with Gwadar port on the coast Makran situated on west of Karachi. China has sent a huge number of workers to take charge of construction activities on the site. On the other hand, Pakistan has raised a special security division comprising 15000 members to assure the safety of Chinese workers at the CPEC.

Gwadar Port, now under development and construction, will be ranked as the third commercial port of Pakistan after Karachi Port and Qasim Port.

The construction is being done in phases and it is being estimated that after its completion, the port will be having three 200 meter long berths and one roll-on, roll-off facility. As for now, the port has the capacity to handle 50,000 deadweight tonnage bulk carriers drawing up to 12.5 meters.

The deep sea port city has been considered as the “Gateway to CPEC” and the “Gateway to Asia”. This construction will not benefit Pakistan and China but Asian countries can take this route as an advantage for them as well. It is also being stated by the officials that construction of port will follow another development of an industrial park as well which might lead to the establishment of another Chinese state within a state as well.

Formation of Gwadar port and advancement of CPEC will be a landmark in world history. The upcoming years may witness this route as the most commonly used trade route for imports and exports all over the world and more specifically in Asia. China and Pakistan combined have made significant progress in creating employment opportunities, cordial interpersonal relationship, exchange of academics, and have a major contribution in raising voices for awareness for world peace. Let us see, how these projects further benefit Asia and both countries on individual grounds.