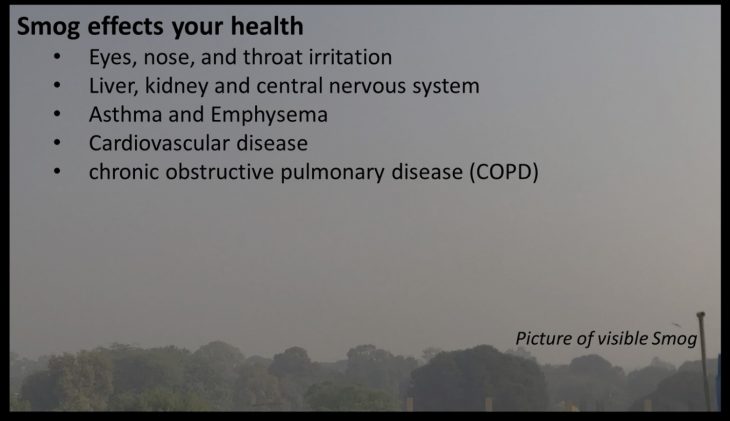 In the past decade, major parts of Punjab in Pakistan specifically Lahore, Faisalabad, Gujranwala etc., experienced heavy smog episodes in winter, which pose serious health threats to their residents. The purpose of this article to is to develop understanding among general public in Pakistan regarding Smog and its relevant health concerns. The subsequent articles will address main sources of smog and mitigation strategies.

Our ambient (outdoor) air comprises of various pollutants such as particulate matter (PM) or atmospheric aerosols, volatile organic compounds (VOCs), and dangerous gases such as oxides of nitrogen (NO and NO2), sulphur dioxide (SO2), and ozone (O3). PM consists of macroscopic dust particles and fine particles such as PM2.5 (particle size < 2.5 µm) and PM10 (particle size < 10 µm).

Table 1. Summary of permissible limits of air pollutants as per WHO guidelines 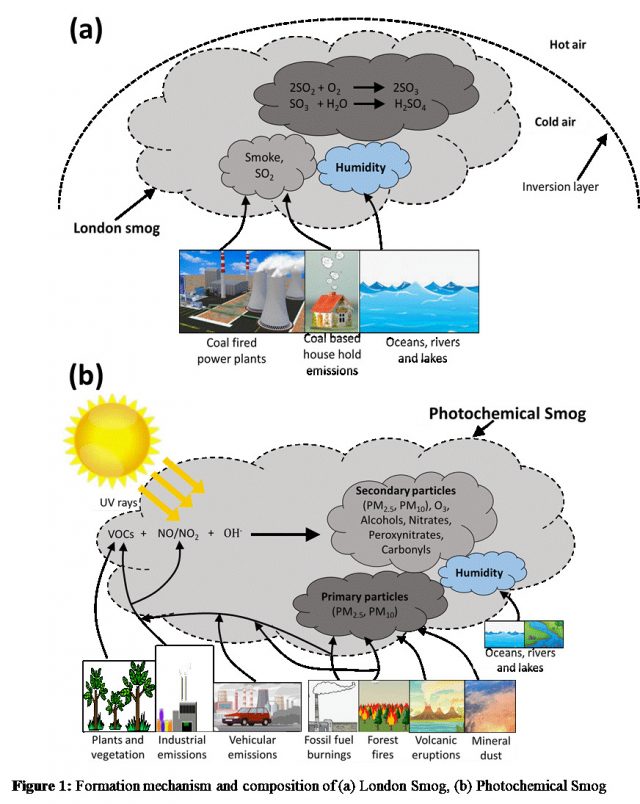 There are two main categories of Smog: London or classical Smog and Photochemical or Los Angeles Smog. Both of them have different composition and formation mechanisms.

The dense Smog episode in the history of United Kingdom (UK) occurred in 1952 and lasted for 5 days from December 5 to December 9. It is also known as “The Great Smog of London”. Recent studies have reported that it killed approximately 6,000 people. Additionally, almost 100,000 were infected by severe respiratory tract infection, mainly bronchopneumonia or acute purulent bronchitis. It typically occurs in winter season (low ambient temperatures) and anticyclone weather conditions (high atmospheric pressure). This weather conditions allows cold stagnant air to be trapped under the layer of hot air which causes thermal inversion. The formation of London Smog is demonstrated in Figure 1. Several coal-fired power plants were operating in the Greater London area and emitted tons of smoke particles. In addition, low grade coal was used with a high Sulphur content which resulted in the emission of large quantity of SO2 in to the atmosphere.  The Meteorology Office, UK reported that approximately 1000 tones and 370 tons of soot particles and SO2 were released in to the atmosphere, respectively. This amount of SO2 is expected to form 800 tons of sulfuric acid (H2SO4). This stagnant mixture of soot particles and SO2 gas blanketed the capital with heavy Smog.  In the wake of this horrific Smog episode, Clean Air Act of 1952 was legislated. However, no significant improvement was observed in the air quality and 10 years later in 1962, another Smog episode occurred which lasted for 3 days.

In the atmosphere, Photochemical Smog is formed by the reaction of VOCs with hydroxyl radicals in the presence of NO and NO2 and ultraviolet light (UV) to form secondary particles which are composed of nitrates, peroxynitrates, alcohols, and carbonyl compounds. Additionally, NO2 decomposes in UV light to form NO and free oxygen radical, which further reacts with oxygen (O2) to form O3. NO2 and SO2 reacts with water vapor to form nitric (HNO3) and sulphuric (H2SO4) acids which precipitate to the Earth as Acid rain or remains in Smog. Thus, photochemical Smog is a complex mixture of VOCs, secondary pollutants, NO, NO2, and O3. The formation mechanism is shown in Figure 2. Numerous cities worldwide such as Los Angeles, Sydney, Mexico City, and Beijing experience this type of Smog on daily basis. It occurs throughout the year, but predominates in summers due to presence of UV rays in sunlight.

Smog consists of significant portions of PM, VOCs, SO2, NO2, and O3, which have detrimental effect on human health and environment.

The most concerning categories of particulate matter are PM2.5 and PM10. These inhalable particles pose serious health and environmental concerns. PM2.5 and PM10 particles enter human body through mouth and nose. PM10 particles are trapped in the upper respiratory track and cause nose and throat irritation. They are eliminated through cough and sneezing. Whereas, PM2.5 particles have extremely small size and they can travel deep into the lungs and enter blood vessels. They cause acute diseases such as cardiovascular problems, respiratory tract infections, dermatological issues, and reproductive health problems.  In 2019, Health Effects Institute reported that 92% of the World’s population was exposed to higher concentration levels of PM2.5 than the annual mean WHO guideline of 10 µg/m3. In 2020, WHO reported that approximately 4.2 million people died per year worldwide as a result of poor ambient air quality.

VOCs cause eye, nose and throat irritation, headaches and loss of coordination and nausea. They can also damage liver, kidney and central nervous system. Some VOCs are carcinogenic, examples include benzene, formaldehyde, vinyl chloride, perchloroethylene, and polycyclic aromatic hydrocarbons (PAHs). They cause leukemia and lung and liver cancer.

Scientific studies have shown that long term exposure of NO2 causes bronchitis. It also affects lung function and create inflammation of air-ways. Eye irritation and loss of appetite are also associated with exposure of NO2.

National Park Service (NPS) reported that children are at greater risk of asthma as their lungs are in development stage as a result of high SO2 levels. Older people with pre-existing lung or cardiovascular problems are more influenced by SO2 exposures. SO2 causes irritation in eyes and inflammation of respiratory attack. It aggravates coughing, mucus secretion, asthma and chronic bronchitis.

High O3 levels in the ambient air can have a marked effect on human health. According to United States Environmental Protection Agency (US-EPA), O3 contracts the airways and traps air inside alveoli which leads to shortness of breath and wheezing sound. It aggravates asthma, emphysema, and chronic bronchitis. Additionally it causes chronic obstructive pulmonary disease (COPD).