Lahore, Pakistan (CNN): When the Jinnah Burn & Reconstructive Surgery Center at Jinnah Hospital in the Pakistani city of Lahore treats victims of acid attacks, it has to use imported skin that costs at least $900 per square inch — a prohibitive cost for the victims of this type of attack who are usually poor, female and vulnerable.

But the Jinnah Burn & Reconstructive Surgery Center is developing a new, cost effective form of artificial skin that could revolutionize the lives of the hundreds of Pakistani women who fall victim to acid attacks each year.
Dr. Rauf Ahmed, an assistant professor at the center, says his breakthrough came from substituting trypizine — an enzyme used to cultivate artificial skin — with sodium chloride, better known as salt, which is a much cheaper and more widely available substance. He says this innovative technique will cost just $5 dollars per square inch.

Ahmed’s artificial skin was initially tested on animals, which were monitored for six months. The first human trial began in October 2018 at Jinnah Burn & Reconstructive Surgery Center Lahore and is due to finish this summer.

The burns unit is testing the artificial skin on five men and eight women. The rest were being treated for burns sustained during a fire. Patients were monitored for bacterial contamination and the results, according to Ahmed, were outstanding, with no side effects.
Human skin is usually sourced in two ways. Either from another area of a patient’s body or from a cadaver. Skin grafts also can’t be stored easily or for a long period of time. It can be stored just 10 days, at 4 degrees Celsius, in a saline-moisturized gauze. 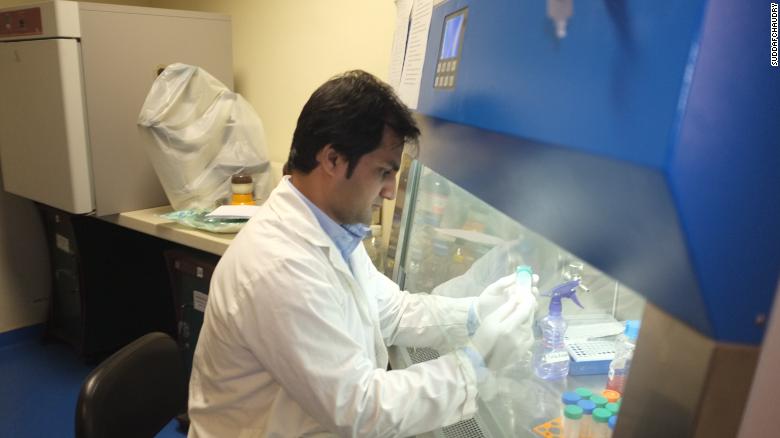 The Depilex Smile Again Foundation in Lahore helps hundreds of victims of acid attacks a year and pays for surgery to rebuild their faces.
According to program manager Abdiya Shaheen Qadri each victim needs about 30 or 40 surgeries and skin grafts to repair the damage, which can cost up to $600 per procedure. It welcomed the initiative to develop affordable artificial skin.
“Victims are from [remote areas like] Khyber Pakhtunkhwa or South Punjab and would never be able to afford this procedure,” Qadri said, adding that most victims are women who spurn marriage proposals.
“Many of the women attacked by acid here are resigned to servitude, therefore accessing medical care is just not possible.”
Josephine Barkat and Salma Arif are two recipients of Smile Again support.
Barkat was only four years old when she was attacked with acid due to a disagreement between her brother and a local Imam. She lost her eye, burned from neck down, and endured multiple painful skin grafts. “It was so painful. I couldn’t move my neck as I was completely immobile,” she said. 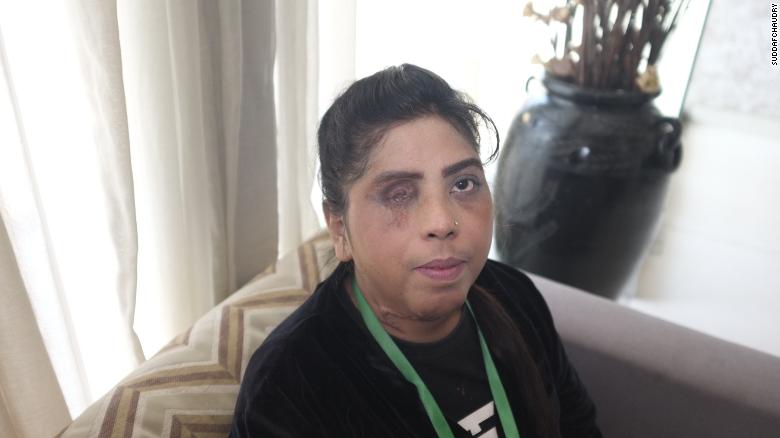 Josephine Barkat was only four years old when she was attacked with acid. She lost her eye and was burned from the neck down.
Arif, who was three years old when she endured burns over 89% of her body, was also providedextensive financial support from the organization for reconstructive surgery. She points to her lips, once heldin place with wires. She said she felt apprehensive about the potential use of artificial skin. “I’m not so sure,” she said. “It’s not from my own body; I am not sure if it would gel.”

The first recipient of the artificial skin at Jinnah Burn & Reconstructive Surgery Center Lahore was a male patient who had the artificial skin implanted on his forehead. Ahmed said he hadn’t contracted any infections or contamination from the substitute skin, and scarring was not visible. All the patients recovered eight to 10 days after implantation. The unit has received approval to develop the artificial skin for clinical use from the Center of Excellence in Molecular Biology in Lahore. 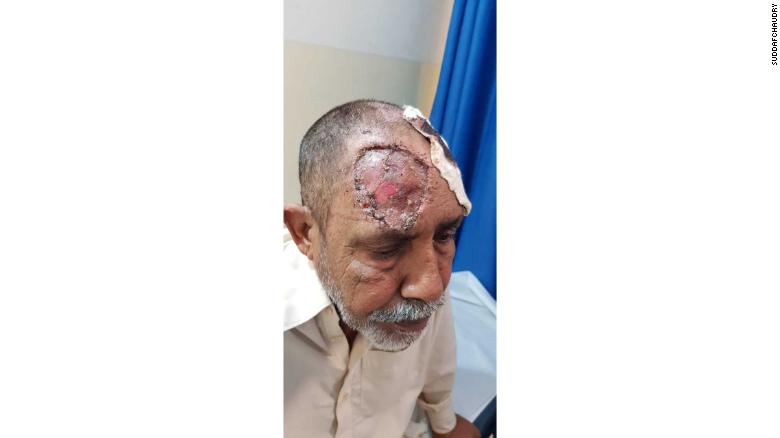 Ahmed and his team at Jinnah hospital aren’t the only ones experimenting with artificial skin in Pakistan. In Islamabad, Pakistani scientists have developed a nanoparticle that regenerates and heals burnt skin.
The team has successfully passed clinical trials and is looking for investors. They believe the science will help curb 265,000 deaths the World Health Organization says are caused by skin burns — both from acid attacks and fires.
A type of artificial skin is being used in the United States and in India a similar technology has been devised by Indian Institute of Technology Hyderabad researchers.
Francis Gugen, the executive chairman of medical research charity RAFT, says “skin substitutes are prone to immunological issues such as rejection. Currently there is no skin substitute that can overcome this.
However, artificial skin can become a revolutionary treatment for wounds. It may not heal naturally such as acid attacks. Furthermore, he explained there is a strong focus on cadaver skin grafts. These grafts are in short supply, as artificial skin can alleviate this dependency.
“Artificial skin can become a revolutionary treatment for wounds that may not heal naturally, such as acid attack,” said Gugen.
His charity supported the development of Skin Matrix,a new technique which helps the skin regenerate itself without the need for skin grafts.The new technology is undergoing a second round of clinical trials.
“It has come to a time where patients do not want to experience another painful skin graft,”he said. “Artificial skin will remedy this.”
Human skin grafts typically require a lengthy recovery period that can be painful. However, artificial skin is implanted into the wound where it integrates with the patients’ own skin. It is less painful and consequently reduces the recovery period.

People ‘look at me as if I am some sort of alien’: A Patient of Jinnah Burn & Reconstructive Surgery Center Lahore

Acid has become an inexpensive and brutal way to extract revenge on women who reject marriage proposals, or for other perceived transgressions.
“96% sulphuric acid can be purchased from hardware stores. Without any ID or a license it cannot be traced; you purchase it with cash therefore there is no chain,” said Jaf Shah, executive director of the Acid Survivors Trust International.
Arif lives in a rural area just outside Lahore and, as a result of the injuries and scars she sustained, she said she feels ostracized. 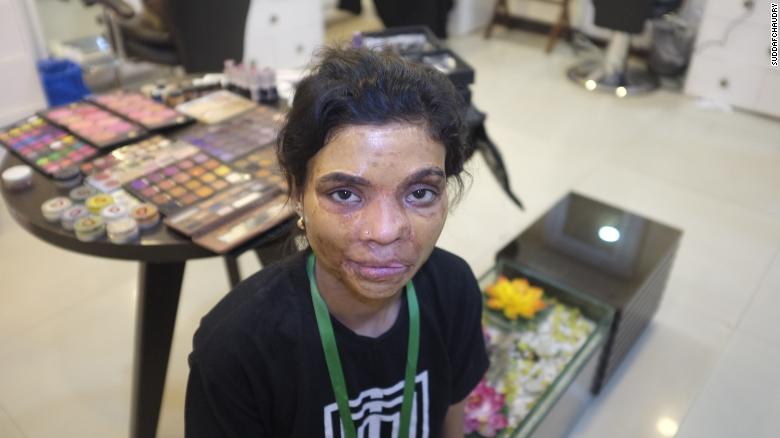 Salma Arif endured painful skin grafts. She was three years old when she was acid attacked.
“Children and adults look at me as if I am some sort of alien,” she said.
If Ahmed’s technique does become a viable treatment, it could revolutionize the lives of victims of acid attacks. But Javed Akram, head of the medicine department at Lahore University, said that the psychological trauma of such attacks also needs to be addressed.
“I have been dealing with victims of acid attacks for decades. When they come to us it’s not just their burns it’s the whole patient we have to treat,” said Akram.
Mehdi Hasan from Lahore’s Human Rights Commission said that police don’t help victims or deal with attackers in a meaningful way. There was a lack of leadership from the government on this issue.
Pakistan’s government brought in legislation in 2011 to tackle acid attacks. Many have argued that the government needs to revisit the law as it has failed to act as a deterrent.

According to Pakistan’s Acid Survivors Foundation, they are aware of 22 victims in 2018 and 37 victims in 2017. However, firm figures are hard to come by and estimates vary widely.

The Human Rights Commission of Pakistan said there are more than 400 acid attack victims annually. Smile Again Foundation said in a statement that “the crime is significantly under reported therefore official figures do not represent the reality on the ground. We have hundreds of victims requesting our assistance across the country.” 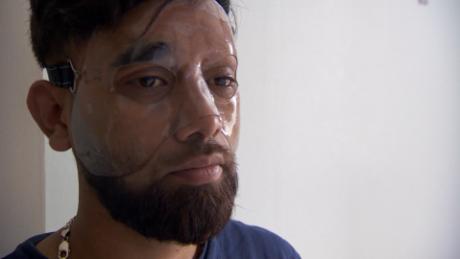 Acid attacks on the rise in Britain 03:42

Shireen Mazari, Pakistan’s minister for human rights, was repeatedly asked for her comments on the situation but did not respond.
Acid attack are also on the rise globally, with places like the United Kingdom. According to Acid Survivors Trust International, there are more than 1,500 recorded acid attacks globally.
Many of patients at the Jinnah Burns Unit told CNN they may never look the same as they used to. Ahmad hopes that his new form of artificial skin will offer an alternative to survivors and expensive skin grafts that are a painful and debilitating experience.
However, he’s worried the powerful companies that import skin may try and prevent his new technique from being widely used.
“I hope my method will be rolled out across the country. The skin I have developed can be stored for up to two years,” Ahmad said.
“It will support victims in most rural provinces to give them a fighting chance.”
Published on CNN – Health
Post Views: 1,103