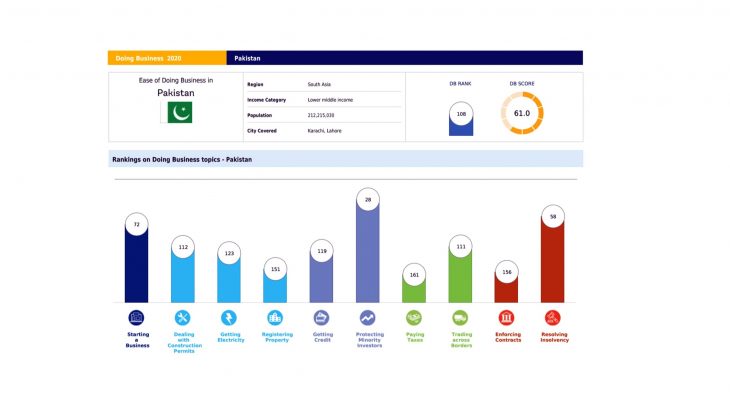 Prime Minister Imran Khan on Thursday lauded Pakistan jumping 28 spots in World Bank’s ‘Ease of Doing Business 2020’ report and said the country will become one of the top investment destinations by 2020.

Taking to the microblogging website Twitter, the premier congratulated those in the government “who worked hard to make this happen” and added the country still has a long way to go.

Another of our Manifesto commitments fulfilled – this time on Ease Of Doing Business. Pak achieves biggest improvement in its history in World Bank’s EODB rankings. Over last decade Pak’s ranking had slipped more than 50 places. Now we have improved 28 places – from 136 to 108. — Imran Khan (@ImranKhanPTI) October 24, 2019

The premier said the improvement in the rankings was one of the promises made in the PTI manifesto and the government had fulfilled the commitment made to the public.

I want to congratulate all the people in our govt who worked hard to make this happen. But we still have a long way to go. InshaAllah before the end of 2020 Pakistan will become one of the top places for investment. — Imran Khan (@ImranKhanPTI) October 24, 2019

Pakistan had risen 28 places in the World Bank report along with securing a place among the top 10 countries with the most improved business climate.

The report states that Pakistan carried out six reforms in the last one year that helped improve its ranking from 136 to 108.

Since assuming his role as the country’s premier, Imran Khan, has doubled down on the importance of improving the economy.