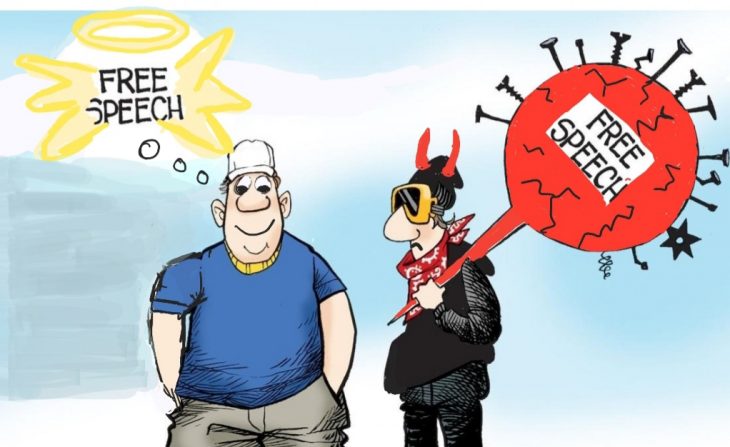 In this modern era, human rights have a lot of meanings and concepts. It has a wide range of rights such as freedom of speech, thoughts, life, religion, culture, opinion. We can consider them as rules because they guide us on how to behave and charge us to treat others with respect.

Human rights are granted by every state to its nation without any discrimination. Freedom of speech is a kind of freedom of expression. Thoughts can be presented through print, audio and video form. The word freedom of expression was introduced in the 18th century by Greeks later borrowed by West. It’s civil liberty which gives worth to the public opinion.

Freedom of speech is not absolute

Western and Muslim school of thought agrees that freedom of speech is not absolute. It should have a limitation. Freedom of speech does not give us the right to offend others. We need to understand that words are mighty, subjective and they can be violent. We depend upon the constraint meanings of words to avoid any confusion. As stated above that words are subjective the ability of self-regulation help us to recognize the hate speech in different circumstances.

Although freedom of speech allows every individual to share their idea, the people who are aware of their religion know that there is some ethical restriction on the freedom of speech. It comes with responsibility as your words reflect your ethical standards and morality.

Cases of offence because of absolute freedom of speech.

West is considered as the hypocritical champion of free speech as they use the right of free speech against the sentiments of Muslims and their religion Islam. Frequently in the western world, Muslims are described in derogatory ways which are not permissible in any community.  France has the largest Muslim community in the western world according to the research Muslims make 5.8% of the population of France.

Recent incidents took place in France in which violation of freedom of expression was done to jeopardize Muslims. Recently Emmanuel Macron sent this message for Muslims “There is one place you standby, watch and keep quiet. There is no opposition coming from you. If you ever oppose the publishing of cartoons you will be labelled as a radical.”

His message shows that freedom of expression means publishing cartoons and offending sentiments is their right but freedom of speech is of course non-existent for Muslims if it challenges power.

Similarly in 2005 after publishing cartoons depicting the Holy Prophet Muhammad (PBUH), Danish newspaper Jyllands-Posten asserted it would not print cartoons offending Christian and Jews. There was a photography contest in the year of 2010 and the winning photograph was of a person wiping his back with the flag of France. That photograph caused a national frenzy.

The question raised was “How could they do that to flag?” The people who voted for that photograph lost their jobs. Minister of interior even wanted to pass legislation for the protection of French flag. What happened to the freedom of speech here? In 2010 Charlie Hebdo’s cartoonist Maurice Sinet got fired because he published a satirical cartoon of former President of France Nicolas Sarkozy’s son converting to Judaism. The most obnoxious graphics are always printed against Muslims in this paper.

The double standards are quite obvious here.

In this world, you have the freedom of speech if you attack the people who cannot talk back to you or portray you back and answer you. According to their perspective, they indeed have the right to insult you in what you behold dear. So how come France can teach kids “we live together, united peacefully.”

In schools, they teach kids to insult their Muslim fellows and then tell them “we are part of same nation”. Can France literally stand in the UN and OECD and lecture the rest of the world on human rights?    Why?

Look at the human right violations people experience there. From individual to state-level we need to understand that complete liberty of speech is a bipartite sword. It should not be used to express discrimination.

Freedom of speech in Pakistan.

96 per cent of people in Pakistan are Muslims other 4 per cent belongs to different religions. Hinduism (1.85%), Christianity (1.59%), Ahmadis (0.22%) and Other Religions (0.07%). Freedom of speech is a constitutional right given to its citizen like other countries.

It is exercised by the citizens but as compare to France it is never used to offend other religions. People are free to practice their religion.

Quran’s teachings regarding freedom of speech

West says that they are the ones who introduce human rights but as we all know that Islam is the religion which discusses all the social issues and has given the human rights centuries ago.

The most important thing is that it is not given by any rules created by any person but it is given by the creator of all Mankind Allah. Quran considers freedom of expression as a fundamental human right and also taught us by many verses that it has some limitation. This freedom is not absolute.

Islam has given the guideline not only for the Muslims but for all mankind. We should adopt it for harmony and peace in society.