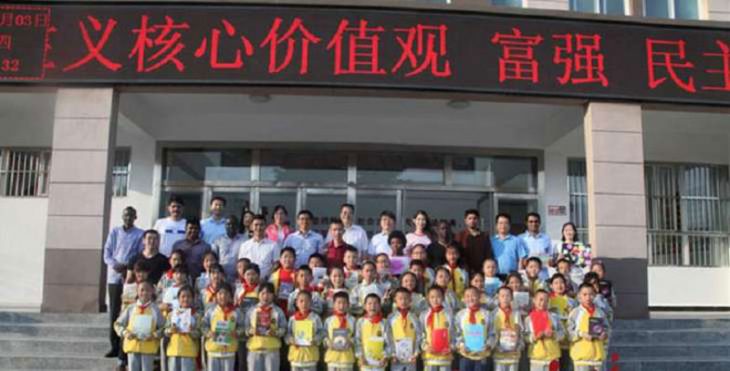 BEIJING, Oct 25 (APP): Usama Kalim, whose Chinese name is Li Hao, comes from Pakistan and is currently a Ph.D. student at Southwest University in Chongqing municipality, China. As one of the participators of 2020 Looking China – Chongqing Youth Film Project, Li got the opportunity to film a documentary of Shiping village, Henghe Tujia Township in Chongqing.

He captured the story of a young man named Lang Xiaoyong who gave up his job in the city and returned home to start a business, according to China Economic Net (CEN) on Sunday. After talking with Lang, Li learned that Lang not only pioneered a rural tourism development model in Shiping village, but also provided local villagers with jobs and subsidized local primary schools. When Li asked Lang his secret to success, Lang just smiled and said, “hard work.”

“Lang came from a poor family, but he was never ashamed of it. He firmly believes that where there are difficulties, there are ways. Through his unremitting efforts, he finally found a well-paid job in the city. He could have stayed in the city, but he chose to come back to build his hometown,” Li said, “I think he is a hero.”

During his seven days in Shiping village, Li was not only touched by Lang’s perseverance, but he also found the key reason that attracted Lang to return to his hometown. Shiping village is different from the villages Li has visited in the past. The road here is asphalted, the network communication is smooth, and the villagers can get access to clean water and sufficient electricity.

Li witnessed the great change of Chinese countryside under the guidance of China’s national policies. “While some countries are still focusing on urban construction, China has already shifted to the vast countryside and has achieved remarkable results,” Li said he believed that the development potential of China’s rural areas was what attracted Lang back to his hometown to start a business.

The happy smiles on the faces of the villagers once again confirmed Li’s thoughts. Li said everyone he met in Shiping village would greet him hospitably. And when the villagers knew that he was from Pakistan, they treated him as their family and prepared diverse and tasty food for him these days.

After returning to school, Li began to edit videos. Currently, he is still thinking about how to use visual language to fully present Lang’s hard work and the tourism development of Shiping village. He believes that Lang is not an exception, but an epitome of the general public in China’s rural revitalization.

“Lang’s personal experience is linked to China’s development process. Through decades of efforts, the number of rural poor has markedly dropped in China and the poverty headcount ratio has seen a continuous decrease. China is now sharing its experience in poverty alleviation with many countries including Pakistan and promoting cooperation in global poverty eradication,” Li said.

“I think we can reflect the changes in China as a whole through Lang’s successful experience against the background of poverty,” Li concluded.