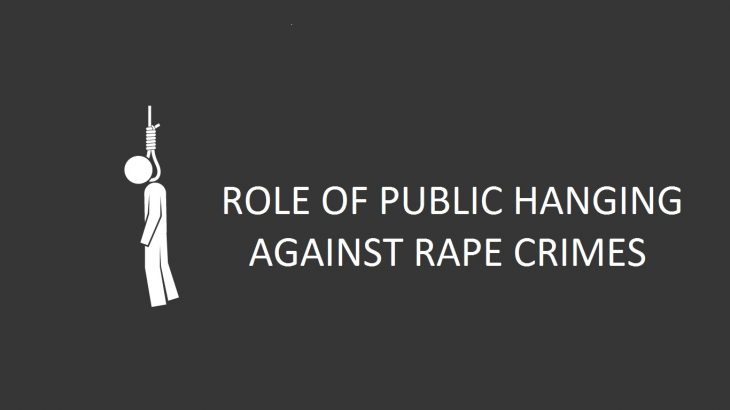 The common debate, today, after that hideous incident is whether public hanging is the solution to it or not. In fact, it has become such a crucial topic for some that we can see some of the social media pages being obsessively against it by making posts again and again, against it. Many Facebook pages, known for their “liberal” perspectives and some political personalities were seen to be straight away against the notion of public hanging or any punishment of this nature, such as:

” Public hangings have proved NOT to be deterrent anywhere. They only brutalise society further. This is public diversion from real, more pervasive issue of chasing better investigation and prosecution oof crimes. Also, pl tell ur police/ministers off for blaming rape victims. ”

None have given any proof to support their seemingly enforcing opinion. Take Sherry Rahman for example who claims that it is actually proven to be ineffective, without giving any proof or reference.

What if we actually do look at this matter by taking stats into account as well, instead of just claiming that it is proven?

The following are the stats of some of the major countries which are against such punishments and are known to be against the kind of practices which are even close to Islam (A harsh but truthful article):

In this article of Times Of India (ehm.. which might open with proxy…ehm..ehm..), we can see what the stats indicate. These are those countries, which fall into the category range of ‘developed countries’, well, most of them. They are scientifically more advanced and carry the sort of reputation of practising the execution of laws, much better than Countries like Pakistan. By the way, it breaks my heart to acknowledge this fact.

So statistically speaking, public punishments do seem to be more effective.

Let’s compare Saudi Arabia, where public punishments are being practised in such cases with the likes of the USA or India. Rape cases in Saudi Arabia are little to none. Rape cases of the Countries mentioned earlier are even more than that of Pakistan.

Difference Between Punishment And Solution

Punishment wise, public punishment is the best option because there are many rapists who are willing to fulfil their lust and then spend some time in jail. Such people only fear death because, after death, there will be constant suffering in hell and in qabar (grave). So if they see the death of one of their kinds before their own eyes, how terrible it is and the fact that the suffering will not end even after death, in fact, it will only intensify; it naturally has a higher tendency to instil fear in them. There are higher chances for them not to conduct such a crime out of this fear.

I came across an Indian article once (tried my best to hunt it down but sorry, couldn’t find it…); we know how common rape is in India: It’s as common as sipping tea. The expert said that these rapists have nothing to lose. They are so lust-hungry that they are willing to face jail for some years or even for a lifetime, just to fulfil their lust, knowing that they just might get caught.

Solution wise, public punishment is not the only solution. We need to understand that there is a difference between solution and punishment. Selection of the type of punishment is part of the solution, with latter having a broader notion. The whole system needs to change. We need to be more educated on such topics and media’s role increases more than ever to strategically show us how to take precautions and show the misguided youth what a terrible activity it is with aggressive marketing. But media, on the contrary, promotes “item numbers”: A content, originating from Bollywood, showing women, proudly and happily objectifying themselves in front of vulgar men. This is just one example of many options. Meetings with specialists should be conducted at the presidential level in order to come up with long-term prevention and education plan with integrated communication, action, tools and monitoring; all this along with punishment as fearsome as public hanging or public beheading.

Rapists will always exist. You can’t change the mind of each and every single individual in any country: Although, we shouldn’t stop trying. Hence, you need the use of force and fear.

Many of the youngsters who talk against the public punishment of rapist reason that it won’t completely end rape as it won’t change the mindset of rapists. My question to them is: Is there any country completely free of rape? As per them, the severity of the punishments or making them public will have a negative impact and won’t reduce rapes. Well, what is the condition of those Countries, acting upon such ethos? Many of them are in worse condition, aren’t they?

It is sad and probably seems some sort of a slave mind-set to me when someone blindly idealises a particular culture or lifestyle without making any research. Such are the people, teaching lessons of critical thinking or a broad-mindedness. This proves that people like them see broad-mindedness or critical thinking as is simply idealising the west and criticising and undermining Islam and their own Country’s values. So to simplify, let’s take a simpler view of the pro-public punishment vs the anti-public punishment parties:

• Such punishments make society barbaric
– Proof: None
• Need to come up with a solution to completely end rape
– Solution: None
• The countries succeeding in completely ending rape with such an approach:
– None

It is clear to judge, whose argument is weaker, isn’t it?

Who Are You Challenging?

To solidify this side of the argument even further, let’s take an example from The Being, who is free from making errors or mistakes, Who has no superior nor any relative, Who has no equal, Who has created, not just us human beings, not just this earth, not just this universe but all the universe, each and every single thing, Whose wisdom is beyond our imaginations and limits: God!

God is severe in rewarding and in punishing. No doubt, God is The Most Merciful, Ever forgiving, but, if He Wills to punish, that punishment may a lot more severe than the punishments in earth.

Imagine if there was no hell, just mild punishments for the wickedest people on earth, whom no one could touch in this life; wouldn’t the number of such people and their crimes have increased? Because there are certain crimes which people conduct, knowing they are gonna get caught and punished but still consider it worth it, only because the punishment is bearable.

So who are we challenging: God? Are we smarter than God? If according to God, public punishment is the best punishment for this matter then who are we to challenge it.