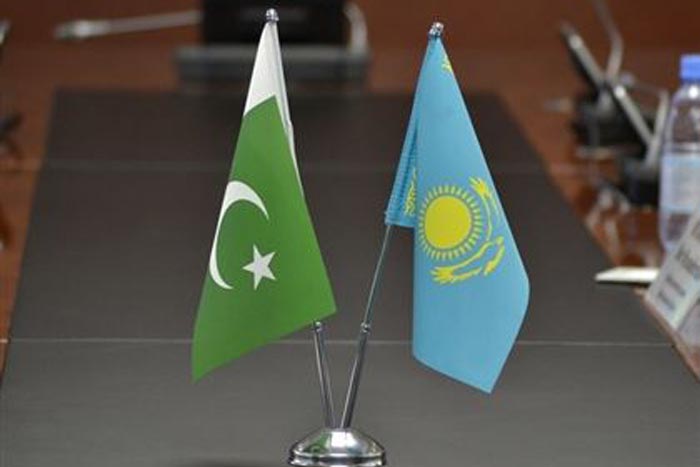 After the collapse of the USSR, Kazakhstan gained its independence in December 1991. Pakistan-Kazakhstan Relations started when Pakistan as one of the first countries who accorded recognition to the Republic Kazakhstan.

The formal diplomatic relations were established in 1992 after the official visit of President of Kazakhstan, H.E Nursultan Abishevich Nazarbayev, to Islamabad. Today Pakistan and Kazakhstan have cordial and brotherly relations and share a common view on world issues.

Furthermore, the people of Pakistan and Kazakhstan have ancient historical links. Today, the Pakistani ports are the shortest and most viable route for Central Asia to access the Arabian Sea and the wider world. Both countries share a common view on international forums like the UN, OIC, ECO, and SCO.

It was Pakistan that took the initiative to orchestrate the first and second Prime Ministerial visits to Kazakhstan in 1995 and 2011 respectively.

Moreover, the then President of the Islamic Republic of Pakistan, Asif Ali Zardari, visited Kazakhstan in 2011. On the Kazakhstan side, the then president of Kazakhstan, Nazarbayev visited Islamabad twice in 1992 and 2003.

The visits to boost Pakistan-Kazakhstan Relations are not limited to Prime Ministerial and Presidential level but various high-level officials of both countries exchanged numerous visits.

In 2015, on the invitation of the then President of Kazakhstan, H.E Nursultan Abishevich Nazarbayev, the then Prime Minister of Pakistan, Muhammad Nawaz Sharif, visited Kazakhstan’s capital, Astana. During the meetings, H.E Nursultan Abishevich Nazarbayev underlined that due to the new changing realities, it’s time for both countries to start a new chapter of their relations. T

he China Pakistan Economic Corridor (CPEC) and the enduring peace in Pakistan which has been achieved after defeating terror in the country are the two major changing realities that the Kazak president was talking about. During the meeting, H.E Nursultan Abishevich Nazarbayev thanked Pakistan for being one of the first countries that supported the Kazakhstan independence struggle.

Furthermore, during the high-level Prime Ministerial and Presidential visits between the two brotherly countries, they agreed to cement and increase their cooperation in the field of trade, economy, education, science and technology, and energy. They also concurred that both country need to bolster trade and economic cooperation by using the incumbent institutional mechanisms.

The two countries inked scores of MoUs in agriculture, disaster management, defense, and trade. The leadership of both countries for enhancing Pakistan-Kazakhstan Relations also decided to perpetuate their cooperation on international forums like the UN, OIC, ECO, and SCO.

However, the trade volume diminished from $28.42 million to $21.7 million in 2018. The exports from Pakistan to Kazakhstan consist of textile, precious stones and jewelry, agricultural and food goods, chemical and pharmaceutical products, vegetables, leather items, shoes, construction materials, sports goods and medical equipment.

Taking the huge trade potential into account, both countries may improve their cooperation in the field of renewable energy, civil and nuclear cooperation and energy such as oil and gas.

Building roads, rail routes, people to people contacts, organizational exchanges, student exchange and cooperation in the field of tourism, science, research, education, and sports can enormously enhance the bilateral relations and the wellbeing of the people of both countries.

In 2018, during a Public Talk at the on “ Kazakhstan-Pakistan Relations : Priorities of Kazakh Foreign Policy”, organized by the Institute of Strategic Studies Islamabad (ISSI), Ambassador of the Republic of Kazakhstan, H.E. Mr. Barlybay Sadykov, rightly pointed out the military and defense cooperation between the two brotherly Muslims countries.

The military cooperation between the two countries is in the field of military education and technical cooperation.

In 2018, Kazakhstan military personnel and Defense and Aerospace Minister paid a visit to Karachi to attend the 10th IDEAS-2018.

Kazakhstan has shown great interest in military cooperation and is keen to learn from Pakistan’s experience in combating terrorism. “Dostarym-2017” was the first joint counter-terrorism military exercise which was held in November 2017 in Pakistan. The second “Dostarym-2019” exercises were held in 2019.