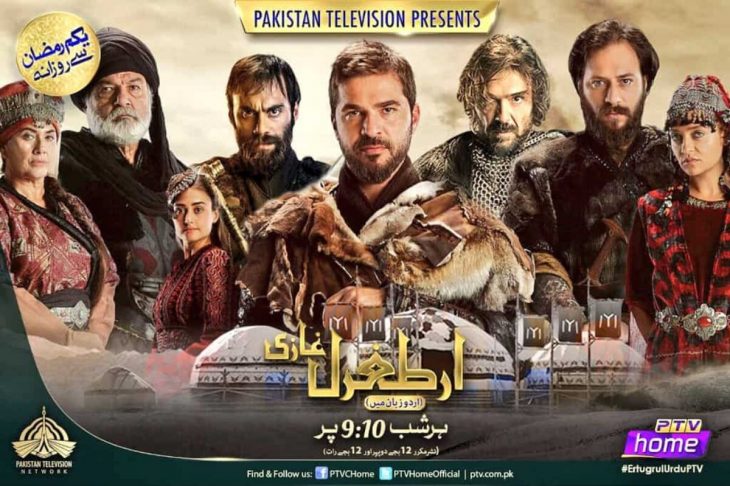 It is baffling how a hit foreign drama can cause quite a stir; that too in successful drama industry. Dirilis Ertugrul is a noticeable success.  Let’s probe into what the fuss is all about.

I don’t watch Turkish dramas, so when I think of Turkey, all I can affiliate with are the delicious Turkish food and the skilful Turkish barbers which I fondly found in Saudi Arabia. It is only now that I have come to know about the fact that Salt Bae is not the only swag, found in Turkey. And Mehwish Hayat confirms it *wink*.

The success of Dirilis Ertugrul

Dirilis Ertugrul is a quality drama which teaches good lessons and can be related to us a lot more than Bollywood or Hollywood, purely on the basis of its Islamic values and struggle, matching perfectly with Pakistan’s values, history and ideology. If foreign movies and dramas can be played and have been playing in Pakistan for a long time, with no one raising any voice or issue upon it openly, why is it so, that when a drama, which seems to be streets ahead is being played, some voices have started to come forward? These voices don’t sound impolite. Even though these voices are against the drama, they are gentle. However, when they hit my ear, they feel like an exclaimed “Oye!” from someone like Maula Jutt.

It seems to me that Dirilis Ertugrul is a hit not just because of its quality. There are two other factors as well:

• It was recommended by the Prime Minister, which of course increased the curiosity among the public.

• It was somehow perceived to be based on history or true events.

Is it really based on true events?

No. Dirilis Ertugrul is based on the dramatized version of selective stories, as heard around. There is no historical evidence to back the events as shown in the series. In fact, some history teachers in Pakistan even claim that Dirilis Ertugrul, the character did exist but he could have been a Non-Muslim; whereas his son, Othman was the one who got converted to Islam. However, we can certainly find some key Islamic values and some good lessons such as women empowerment in the series.

So this series should be seen as a fictional source of entertainment with quality production and good lessons on the display. The BBC named it as the Muslim version of The Game of Thrones, in one of its headlines.

I’ll turn off the stereotypical mode now, as that is not how I have taken the whole scenario.

But still, why so miffed?

So the question comes forward again, is it wrong to watch a foreign-based Islamic drama, if it has a potential to become a great hit, which could set a few benchmarks in the drama industry and has some good lessons and values on the display? Why on earth would it be wrong to watch it?

It is not for the first time that we are seeing a Turkish drama on a Pakistani TV channel. There have been quite a few before. None of them has intruded upon the good fan base set for the Pakistani dramas. One hit drama, based on a very different theme is not capable of destroying the ever successful Pakistani drama industry unless we lack in talent or creativity. Do we?

In my opinion, the reason why it seemingly threatens some artists is because of the possible lack of creativity in the drama industry. Pakistani dramas have always seen success, locally and across the border. But currently, majority of the dramas tend to revolve around the same formula of talaq, love affairs, taboo affairs, gharelu masail etc… The very thought of HumTv Dramas conjures my brain into seeing flashes of this formula. We do need such themes as well and the production teams and writers have been making them perfectly. But this should not be the only type of story theme. We lack in creativity, in terms of different themes and morals. I mean I love KFC. But if I keep having it over and over again for 2 weeks, I’ll be fed up with it, no matter how delicious it is. Same is the case with the current Pakistani dramas scenario: they are really good but if we see the same kind of dramas, again and again, we will get bored. They could have used this amount of time and energy for some different kind of a storyline.

The sorts of dramas with a story-line which doesn’t surround around the fixed formula as mentioned above have seen their share of great success as well. Dramas like ‘Waris’, ‘Alpha Bravo Charlie/ Eehd E Wafa’, ‘Sang E Mar Mar’, ‘Udaari’ etc… have shown great success in terms of TRP, positive impact and entertainment. In fact, I’ve heard several times from my parents and some relatives that back in the era, whenever an episode of ‘Waris’ used to telecast, the streets would get empty. The central story-line of that drama was by far not husband/wife cheat, divorce or taboo love affairs. I remember there was another drama ‘Murad’, based on the transgender community; I was thirteen at the time of its release. It was also well received by the audience. It has good online ratings as well.

Point being, it gives an impression that the producers prefer staying on the “safe” side, as long as it is producing revenue; to hell with the creativity, positivity and taking bold steps for the betterment of the industry.

Sarmad Khosaat, one of my favourite directors, with a masterpiece like ‘Manto’ and ‘Zindagi gulzar hai’, perfectly expressed his disappointment in an interview with Rafay Rashid. Take a look at what he said:

“I’ll be honest; I am not excited by TV anymore and not as a practitioner. But what I see on TV, it’s just about what manages to excite people on the short term and people are happy with it,”

“I feel that it’s such a hotchpotch. I don’t feel that anybody is sitting down even for their own channel designing content. Or thinking or where the year is going to be headed towards or what are they gonna say about their body of work. Content-wise I don’t feel excited,”

“I don’t find the writing inspiring. There are definitely some good writers but you know it’s lacklustre. There is so much to write. So many episodes to write, that it’s dull writing”
“And dull writing translates into a dull direction, dull performances. Everything looks the same. ”

This, I think, is exactly why some of the media personalities feel threatened. These production teams and writers are happy to stick with the same formula and keep getting richer; whereas Dirilis Ertugrul might become the one to break this revolving chain of dullness. I mean it was exciting at the beginning, but now it is just too much.

I think we can see this drama as a case study, benchmark and as a wakeup call to think out of the box and live up to our potential; for we certainly do not lack in potential. We have just decided not to live up to it, at the moment.

In the end, I’ll recall upon the fact that “neeat sirf Allah janta hai”. I might have sounded harsh with the writing so I’ll make it clear that maybe the intentions of the production teams or writers are good and they are too busy in competing with each other, making the best out of this current trend. But it is time to move on and start having some varieties. As a fan of the Pakistan drama industry, I’ll always be excited to see how they produce dramas on different topics, themes and social cause, as they never disappoint me, whenever they make an attempt.