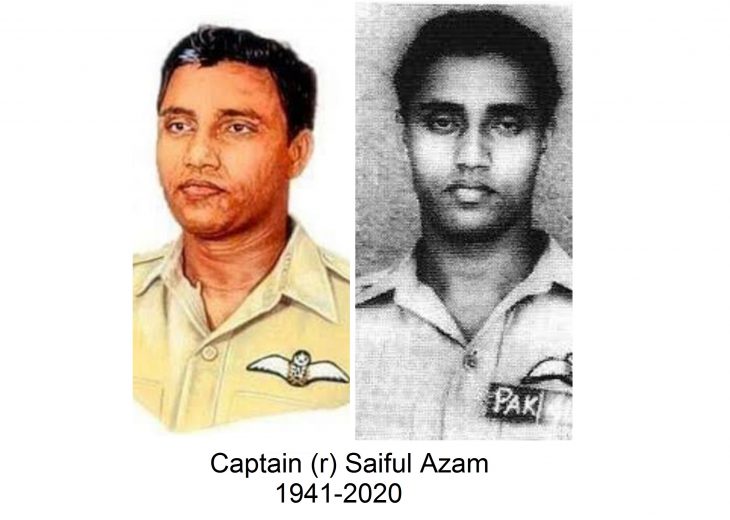 PAF pilot Group Captain (r) Saiful Azam died at age 80 due to old age complications at Combined Military Hospital (CMH) around 1 pm on Monday, according to Dhaka Tribune. He was awarded Sitara-i-Jura’at for his legendary heroism in the 1965 Indo-Pak war.

Saiful Azam was born in 1941 in Pabna, Bangladesh. He joined Pakistan Air Force (PAF) at the age of 19 and served till 1970. After the cessation of Bangladesh, he joined the Bangladesh Air Force (BAF) and served from 1971-1979. He also served as chief of the Civil Aviation Authority Bangladesh (CAAB). After retiring from the military, Azam served as politician and lawmaker from 1991-1996.

According to Dawn, Bangladesh army’s Public relations wing, Inter-Service Public Relations (ISPR), Directorate also confirmed the death to the Anadolu Agency, one of the oldest and pioneer Turkish News Agency.

“We came to know about the death of Captain (r) Saiful Azam but we have not published it on our official web page as he is a retired official,” ISPR Director Lt. Col. Abdullah Ibn Zaid said.

Saiful Azam is the only pilot of Bangladesh Air Force (BAF) who severed in four different countries air forces, namely Pakistan, Iraq, Jordan, and Bangladesh. He shot down Indian fighter Plane in the 1965 Indo-Pak war and downed four Israeli fighter planes in “The Six-Day War” in 1967, also known as the Arab-Israel war.

According to Dhaka Tribune, He was awarded “Top Gun” by the United States Air Force (USAF), after his training in the US in April 1961. In 2001, the USAF awarded him again as one of the world’s 22 “Living Eagles”.