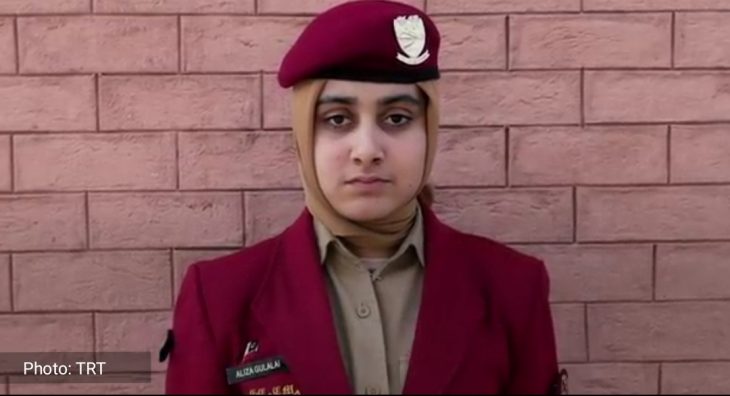 Cadet Aliza Gulalai comes from a conservative Pashtoon family of Takhtbhai, Khyber Pakhtunkhwa, Pakistan. She had to fight the ultra-conservative society for her education and dreams. She is the first-ever female in her family who got into school. With her great academic potential, evident from her academic success, she decided to enlist herself in the armed forces of Pakistan.

Talking to TRT World, Cadet Aliza Gulalai stated that her parents not only went through extreme societal pressure but endured financial problems to support her education. However, with the sheer determination and vehement support of her family, she has been able to break the taboos.

The 15-year-old is a student of class 8th of GCCM (Girls Cadet College Mardan) and a straight-A student. “I always dreamt about joining the army but I never believed that I could because my family’s societal and financial situation. Then I didn’t even know that there was a cadet college for girls. However, it was some girls that I met with them in my English language academy who advised me to prepare for the test along with them.” She noted in her interview with TRT World.

Initially, her entire family was not happy about her endeavors because traditionally girls stay at home and society doesn’t give much importance to girl’s education. She said she knew that even if she qualifies the test, her parents could not afford the fee. However, she was adamant to give it a try.

Talking to TRT World, her mother said “all my children are equally dear to me, but this one (Aliza) is the eldest and she is the most patient and tolerant among them [that is why she is dear to me the most].” Cadet Aliza Gulalai continued, adding that, “Not only does she do what i say, but even the helpers in her previous school pray for her.”

According to Aliza, her father works abroad to provide for his family. Thus due to his exposure to the outside world, he knew the importance of education. Her father not only allowed her to study but fought with the societal taboos for her future.

“She is passionate about her studies and her father wondered if the other kids would turn out as competent as her, he said ‘she should be allowed to explore and go to this school.’ I told her father that her school is very expensive and we have other kids to look after, too. He said, ‘every child brings their own luck with them and we cannot let her talent go to waste because of other kids’” her mother noted during her interview with TRT World.

After two weeks of her selection, Cadet Aliza Gulalai got a call from her school that there is someone who wants to sponsor your education. “That was the best moment of my life” she noted.

Pakistan is very rich and diverse in its culture. Pakistanis such as Aliza Gulalai are the true future heroes of our nation and we all are proud of such individuals. Pakistan Zindabad!